The 12,000-square-foot Gunnison Arts Center is a community arts center dedicated to exhibiting and developing visual, literary and performing artists in the Gunnison Valley. With three gallery exhibit spaces, a gallery shop, a dance studio, a 72-seat community theatre/stage, a clay center for ceramics, meeting rooms and a visual arts classroom all under one roof, there is truly something for everyone at the Gunnison Arts Center. Please come visit us soon and GET INTO IT!

The Gunnison Arts Center is a nonprofit 501(c)3 organization, which was founded by the Gunnison Council for the Arts in 1989.

The Gunnison Council for the Arts, an all-volunteer organization, was started in 1983 by a handful of individuals in the back room of a local restaurant. Most of these individuals had been active in Webster Players, a local theatre group, which could not find suitable performing venues. At the same time, the local dance instructor was outgrowing the space for her classes. In January 1984, the group was incorporated as the Gunnison Council for the Arts and a membership drive was held in 1986 during which 75 members were recruited. In May 1988, the Council leased one of the community’s oldest buildings from First National Bank of Gunnison to house most of the council’s activities, including an art gallery, a 72-seat theatre for drama and music, special exhibits and a variety of classes. The building was built in 1882 as the Denver & Rio Grand Railway Express depot and European Hotel. Through the years, the building housed the Gunnison Hardware Company, a clothing store and a bar/restaurant. The building is now listed on the State Register of Historic Properties and was purchased in 1992 by the Council through the generous support of Gunnison citizens, private foundations and other philanthropists. After an extensive architectural review and planning process, a six-phase renovation project commenced in the fall of 1996 with the renovations being completed in the fall of 2000. Since that time, the programming at the Gunnison Arts Center (‘GAC’) has grown to include year-round programming for children and adults alike. 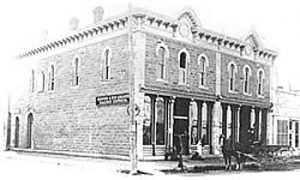